Carnival communication is a little Slack…

The Doddington Village Sports and Carnival committee is a great team to work with, but like many other groups, we have had our fair share of issues in communicating within our 20+ team. We would use email, SMS and more recently, WhatsApp, to send questions, comments and reminders within the group, and with a group larger than about 4 or 5, this can start to get a little out of control.

Take for example, a simple emailed question about the cost of entry to the event, from me to Erica, the Treasurer, but I might have CC'd Jason the Chairman on it, for his reference. Erica might 'Reply All' to the email, but add Ian onto it as well, as he may has asked that question separately. But then Jason replies, asking to confirm the opening time is 13:30 . Ian replies to this, and soon a different conversation begins. Each time, emails are getting longer and longer, and the history of each thread of the conversation is carried around with the reply at each stage, meaning that, as a recipient of these emails, I have to read the back-story of each email to see what was asked, and now what the answer is.  Not great.

SMS and WhatsApp are similar in their problems, but bring different aspects to it too, so in my mind, we needed a solution to this fundamental communication problem.

Another interesting aspect to the problem, is trying to find out which 'medium' I might have had a particular conversation with someone on… “Was it on email? Did I text him? What about WhatsApp?? “

The thing to remember, is that we all have our own lives to deal with, as well as piling Carnival on top, meaning that fighting to find things out for something that we're all volunteering for, makes everything more difficult!! Something needed to change.

Part of my 'IT Geekness' is seeing where, if and how new tech-based tools can help solve a problem, which is how we came to using Slack within the committee. 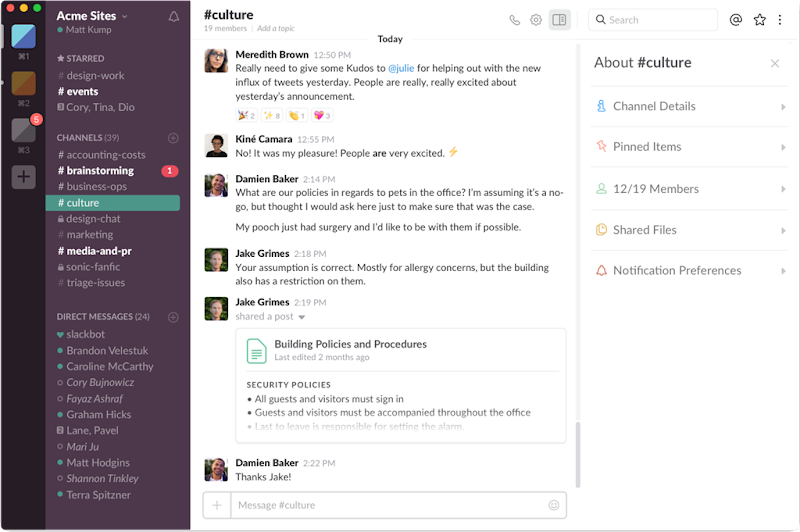 Slack is basically a messaging tool, but one whereby you can deliberately split-out 'channels' for different conversation topics, and everyone can freely add or remove themselves from each channel according to their interest or relevance.

Here's what I mean.

and each group can have it's own list of 'members'; If I'm not fussed about conversations about the Facebook Page, then I can simply remove myself from that group, and Slack won't notify me when there's a conversation happening, yet I can still dip into it, to see what's been going on.

If I have a question regarding, say, the starting time of the Carnival Parade, I simply click on the 'Carnival Parade' channel in Slack, and ask my question in the same way I would on email, SMS or WhatsApp, but the difference is already made clear that the Carnival Parade channel is made of the people that want to know about news and info regarding the parade. Phone notifications are sent to everyone that is part of that channel, indicating that there's an unread message, and someone else can respond in real-time, which then notifies others that there's been a response. So, the conversation carries on, but just as it would if we were stood in a room talking about it, but without the back-story baggage of email.

Private (or direct messages) can also be sent, so if I wanted to ask Jason a question, but which was not something I wanted other people to read or know about, I can (and do!) send Jason a private message, that he can reply to, much in the same way as an SMS conversation would be. But all in the same place.

Helping to communicate within the committee has helped to not only spread more information around about what's happening, but it also brings in people who might normally have stayed out of these conversations. People are encouraged to ask questions about things, to clarify details, and Slack gives everyone the same platform and the same ability to ask or to respond to someone else's questions.

And in case you're wondering, we're using the free version of Slack. Not a single penny of Carnival money has been spent using it (and nor will it!!) and it has brought all of the benefits with it of a paid-for application, and to a relatively small group like the Carnival committee. The problem would have been that even if there were a 69p charge from App Store to install it, it simply wouldn't have happened within our team, not because we're tight (which we are!) but more that there's a pay-wall hurdle to overcome, meaning that some people just wouldn't get around to it, and then it would pointless.

Depending upon what time of the year it is, as this affects which of our many fundraising events we're working on, we might use Slack a dozen times a day, here and there between tasks at home or at work, and some days we don't use it at all. The power of communication that, in my opinion, that it has brought to the Carnival committee is so very much understated; I don't need to have everyone's number in my phone, nor even be friends with them enough to WhatsApp them on a frequent basis. Yet I, as one part of the 20+ team, have direct access to everyone in the group, and can ask my pointless questions, or ask for help on a particular topic.

But to be clear, Slack is good, but it's our team's input and choice to use it that has made it great. I’m sure that we would have struggled on without it as we had done for years, and without knowing that this was a ‘solved problem'.

Popular posts from this blog

By Brett Rigby March 14, 2019
Every year, we’re always asked if there are any jobs that people can chip in to help us with, and each year – jobs like helping out on the day of the carnival, helping to set-up the field, or to take it all down again.  In our Carnival Committee meetings, we always talk about getting a Jobs List up on the website ahead of time, and each year, we don’t get around to do it. It’s not that we’re forgetful, or don’t care about it – we do. It’s just that with busy working lives, children and other ‘life stuff’, it gets… prioritised… at the bottom of the list!  But now, we’ve done it!  We’ve started a Jobs List on the Doddington Carnival website where you can check-out what help we need and throw your name into the ring to help!We’ve got the Race Night with a Twist coming up very soon, and there’s a job or two on there already for that (but there will be more!!) and then we’re into the preparations for the big events in July!So please, have a look! Get in touch, ideally sooner rather than la…
Post a comment
Read more

Behind the Scenes: “The Doddington Stories”

By Brett Rigby April 25, 2019
Bit of behind the scenes website work-in-progress for you? Ok.So, I wanted to make a bit of a ‘thing’ about the Trophies, Shields and Awards that we hand out each year, and wanted them all to appear on the website.
All Awards that we give out to the Winners and Runner-ups on Doddington Village Sports and Carnival.At present, we list the various awards and their respective winners, but I wanted to have a little extra … something for each one.So, just as we were setting up for the Awards Presentation evening, in September 2008, I took my camera along to the Village Hall, and took the opportunity to photograph (to the best of my ability!!) each and every Award.I used one of those fabric-based pop-up studio-style photo boxes, (bit like this one  =>) such that the background on each trophy was white and therefore easier to use on the website. However, as I might have hinted at, I’m not a photographer and far from knowing what I’m doing with a photo studio!  Either way, I took about a hun…
Post a comment
Read more

Race Night With a Twist!

By Brett Rigby April 13, 2019
The Doddington Village Sports and Carnival’s first (ever!) Race Night With a Twist has come and gone!We had a great evening of entertainment, betting and posing with hobby horses!Everyone who came had a thoroughbred of an evening, leaving some guests a little ‘horse’!Here’s a few of the photos that we’ve taken on the evening, where you can see the ‘Jockeys’ lined up on the game board, awaiting the roll of the fateful dice.  We’re hoping to stage another Race Night With a Twist, as it really was one that ran away with us!To add to everything, all ‘Jockeys’ in all races were given a free gift of a t-shirt, courtesy of Sewlo Embroidery, based in Doddington.All in all, a brilliant evening, thanks to everyone that came along, as well as to everyone that helped to get it up and running. Fantastic effort.
Post a comment
Read more